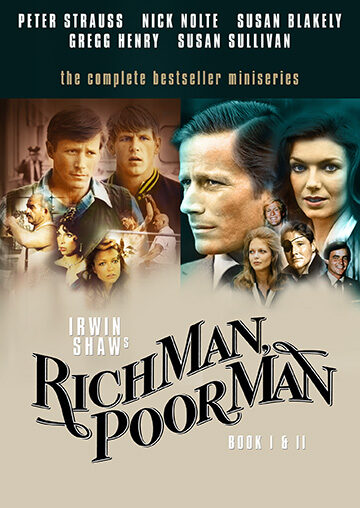 The first-ever dramatic miniseries to appear on American television, the multi-award winning RICH MAN, POOR MAN spans decades and generations to trace the epic story of the Jordache family from 1945 to the late 1960s. RICH MAN, POOR MAN BOOK brings together all 34 episodes from Books I and II of this classic 70s series. Based on Irwin Shaw’s best-selling novel and featuring an all-star cast (including Edward Asner, Billy Bixby, Susan Blakely, and Robert Reed), the series focuses in particular on Rudy Jordache (Peter Strauss) and his troubled brother Tom (Nick Nolte) as they navigate divergent paths away from their impoverished immigrant upbringing. While ambitious Rudy seems destined for success, Tom suffers from an endless string of bad luck but in the end, finds love. Encompassing a period of tremendous social and political upheaval, the Jordache saga explores timeless themes such as the difficulty of human relationships and the disillusionment of the American dream. The series also chronicles many of the most important events in the latter half of the American century, including the McCarthy witch hunts, the Korean war, the birth of the Civil Rights movement and the student riots of the 60s. An absorbing and masterful portrait of a fascinating and ill-fated family, RICH MAN, POOR MAN: THE COMPLETE MINISERIES recaptures a landmark moment in American broadcasting history.